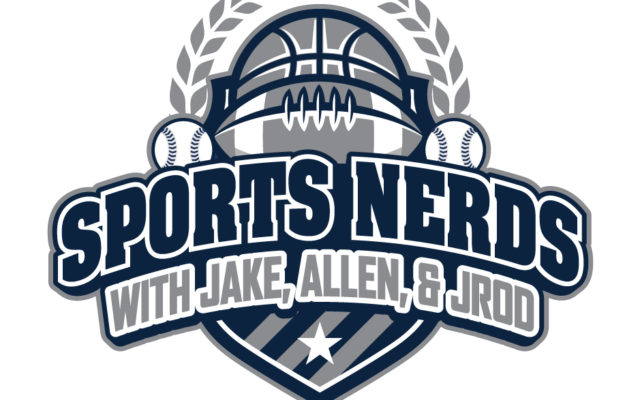 Welcome to the official page for the Sports Nerds here on KGNC!  You’ll be hearing (and reading) a lot more from us in the future, so we figured we would take a few minutes to introduce who we are and a bit of our backgrounds.

The first member of the team is Jake Boesen.  Jake is originally from Washington D.C. but came to Canyon to attend West Texas A&M, and graduated in May of 2021 with a bachelor’s degree in Digital Media and Communications. He served as the Sports Director for the WT on-campus radio station KWTS The One 91.1 while attending WT , along with hosting the weekly 3-hour on-campus sports talk show called Unsportsmanlike Conduct.  While maybe not the athlete that his co-host Allen is, he makes up for it with his love for and knowledge of advanced statistics.

On the opposite side of the desk we have our other host Allen Roberson.  Originally from Pflugerville, Texas, Allen was recruited to play football at WT and spent 3 years on the team before eventually joining the broadcast media department.  He spent nearly 2 years working with Jake on their show Unsportsmanlike Conduct, both with his commentary on the show and his production behind the scenes, before graduating in December of 2020 with a degree also in Digital Media and Communications.

Want to stay in touch with the Nerds even when we aren’t on air?  Message or tag us on Twitter for a chance to be mentioned on the show! You can find Jake on Twitter at @jake_boesen, and Allen at @AGRoberson_.

We’re excited to share what we love with you each and every day, right here on KGNC!