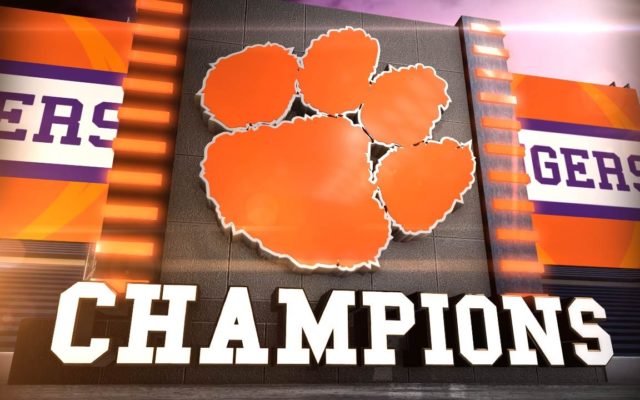 (Santa Clara, CA) — Clemson is the new king of college football after a 44-16 win over defending champion Alabama in the National Championship Game at Levi’s Stadium. MVP Trevor Lawrence threw for 347 yards and three touchdowns to lead the Tigers to their second national title in three seasons. Justyn Ross caught six balls for 153 yards and a score for Clemson, which shut out ‘Bama after leading 31-16 at the half. Tua Tagovailoa passed for 295 yards and two TD’s but was intercepted twice, including a pick-six. Clemson finishes 15-and-0, while Alabama ends its season 14-and-1.

Cowboys Advance, Play Next At Rams

(Frisco, TX) — The Cowboys will return to the practice field today to begin preparing for a NFC Divisional Round playoff road game against the Los Angeles Rams on Saturday. Dallas advanced with a 24-22 home win over the Seahawks in the Wild Card. The Rams drew a first-round bye as the second seed. Our pregame coverage begins Saturday at 6, kickoff at 7:15.

(Frisco, TX) — The Cowboys are projected to add a fourth-round compensatory pick in the 2019 draft. The extra selection comes from linebacker Anthony Hitchens signing with the Chiefs after his rookie contract expired.

(Houston, TX) — The Texans signed eight players to reserve futures contracts. That included running back Josh Ferguson, tight end Jerell Adams and wide receivers Jester Weah and Isaac Whitney. Houston also learned it will have the 23rd overall pick in the 2019 NFL draft. They own the Seahawks’ second-round pick and will select back-to-back with the 54th and 55th overall selections.

(Dallas, TX) — The Mavericks lost 107-97 to the Lakers, who were without injured superstar LeBron James, in Dallas. Rookie teenager Luka Doncic led Dallas with 27 points. DeAndre Jordan had 10 points and 11 boards in defeat. The Mavs scored only 30 points after the intermission. The Mavs will host the Suns tomorrow night.

Spurs Down Pistons In Motor City

(Detroit, MI) — DeMar DeRozan scored 26 points and LaMarcus Aldridge had 25 as the Spurs beat the Pistons 119-107 in Detroit. Derrick White contributed 17 points to the win, San Antonio’s fifth straight. Blake Griffin topped Detroit with 34 points. Andre Drummond had 19 points and 14 rebounds in defeat. The Pistons are 1-and-5 in their last six.

(St. Louis, MO) — The Stars continue their three-game trip tonight facing the Blues in St. Louis. The Stars lost 5-1 on Sunday in Winnipeg to end their five-game stretch of picking up a point. They are third in the Central with 48 points. The Blues shut out the Flyers 3-0 last night in Philadelphia.

(Arlington, TX) — The Rangers will begin their winter caravan next Monday, making stops in 21 cities. The first stop will be in San Antonio with manager Chris Woodward and players Jesse Chavez, Patrick Widsom. The caravan will also visit Austin and Waco next week. Willie Calhoun, Isiah Kiner-Falefa and Shawn Tolleson, who played at Baylor, will be on the Waco tour on January 17th.

(Undated) — Former Texas quarterback Vince Young and ex-Texas A&M defensive lineman Jacob Green are among the 13 players in the 2019 class selected to be inducted into the College Football Hall of Fame. Young guided the Longhorns to the national championship, beating USC in the 2006 Rose Bowl to cap off a 13-and-0 season. He had a 30-and-2 record as a starter. Green was a first-team All-American in 1979 and set an Aggies’ record with 20 sacks that season. The induction awards dinner will be December 10th in New York City and they will be immortalized at the Hall in Atlanta.