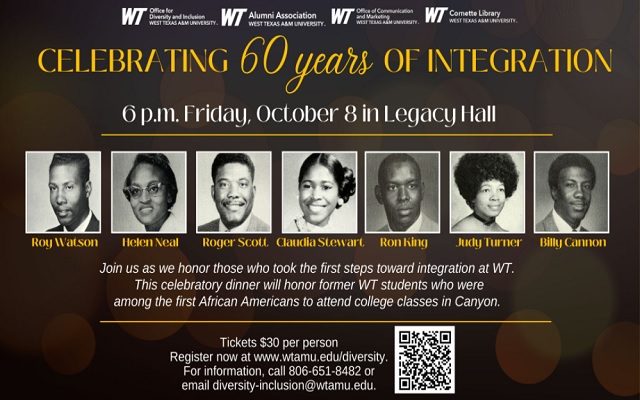 West Texas A&M University is honoring the first black students who came to the University from 1950 from then West Texas State College.

When two black students were denied admission into the College in 1959, John Mathew Shipp Jr. took his case to court, U.S. District Judge Joe B. Dooley found in February 1960 that Texas’ attempt to maintain racially exclusionary colleges to be unconstitutional.

That opened the doors to Betty Jo Thomas, Mae Deane Franklin and Roy Watson, who enrolled in Fall 1960.

She was followed in Spring 1961 by Helen Neal, who attended WT to complete a college degree and became a community leader in Amarillo.

Those students will be honored at the Celebrating 60 Years of Integration dinner at 6pm at 8 in Legacy Hall in the Jack B. Kelley Student Center.