WTAMU Christmas Concert To Bring In the Holiday Cheers 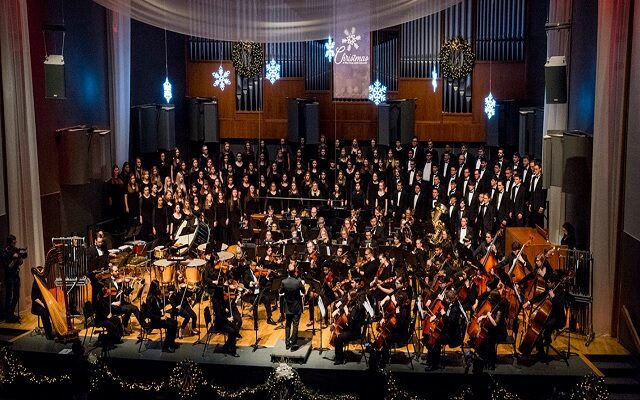 The Christmas spirit is taking over the West Texas A&M University campus.

The WT Chamber Singers’ Christmas concert will be taking place at 7:30pm on December 4th in the Sybil B. Harrington Fine Arts Complex Recital Hall.

“Music of the Christmas Season” will feature the WT Symphony Orchestra, WT choirs and the Canyon High School Chamber Choir at 4pm and 7pm on December 5th. This show is free but tickets are required.

In addition to Bartley, conductors are Pullen and Brandon Farren of Canyon High.

An array of classical and traditional works will delight audiences, including “Welcome Yule!,” “Go Tell It on the Mountain,” “Angels We Have Heard on High,” “Christmas Fantasy” by Dan Goeller and “Hark!” by Felix Mendelssohn, arranged and orchestrated by Dr. B.J. Brooks, WT professor of theory and composition.

Soloist Rossitza Goza, WT’s Harrington Lecturer in Violin, will be featured on “Meditation” from “Thaïs” by Jules Massenet. The Canyon High Chamber Choir and WT choirs will join the orchestra for Taylor Scott Davis’s “Magnificat,” featuring soloist Eleisha Miller, senior music major from Amarillo. Davis will be in residence for the preparation and performances as part of the WT Guest Artist Series.