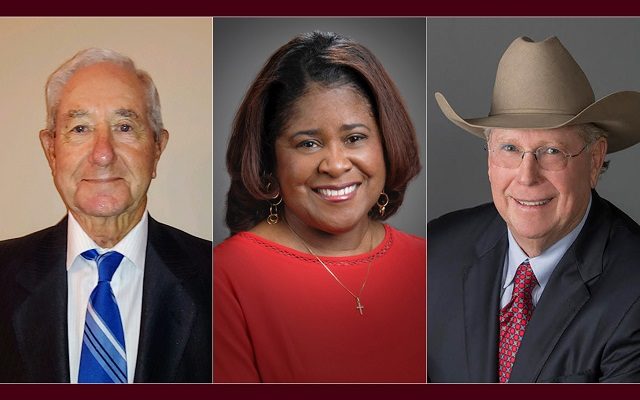 West Texas A&M University has announced the recipients for the 2021 Distinguished Alumni Awards.

The WT Alumni Association has selected NFL star Jerry Don Logan, Poet Claudia Stuart and social justice advocate Bruce Thompson were selected for achievement in their respective fields as well as their contributions to the Texas Panhandle community.

The 3 will be honored along with the 2020 Selected Members on October 7th during Homecoming week.

Jerry Don Logan, who earned a bachelor’s degree in education in 1964, is considered one of the greatest football players to compete at WT. The MVP of the 1962 team that defeated Ohio State in the Sun Bowl, Logan went on to play with the Baltimore Colts as a starting defensive back, competing in both Super Bowl III and Super Bowl V. In the latter game, Logan intercepted a pass and ended the Dallas Cowboys’ last-ditch scoring effort; the Colts won 16 to 13.

Logan was selected to the Colts’ silver-anniversary team in 1977 and was ranked in one poll as the 29th greatest Colt of all time.

Since retiring from football, Logan has lived in Graham, where he manages the family ranch and opened a cutting-horse training center. Logan and wife Fanny, also a WT alumna, have four children, 14 grandchildren and one great-grandchild.

Claudia Stuart, who earned a bachelor’s degree in sociology in 1972 and a master’s degree in social science in 1985 from WT, is a WT professor emeritus of sociology and criminal justice, as well as being a licensed master social worker.

Active in church and community, she serves on many boards and commissions and as a consultant to social service and law-enforcement agencies. As a public speaker, her topics include faith, diversity, culture, social justice and creative arts. An award-winning author and artist, she has published several books of poetry and displayed her art in many venues, galleries and art exhibitions.

Stuart and husband Harold have two children and five grandchildren.

Bruce Thompson, who earned his bachelor’s in industrial arts in 1965, invented Sand X, an environmentally friendly process that separates oil from sand during fracking, which reduces danger for oilfield workers and saves companies millions of dollars while removing hydrocarbons and chlorides from sand.

Thompson also invented the Super Loop, which reduces virtually all emissions of hazardous gases on well sites, and the Sand L, which evenly and safely dispenses of Sand X-filtered sand.

His Sand L team won the 2017 World Oil Award for Best Health, Safety, Environment/Sustainable Development — Onshore, and other inventions also have been recognized by the industry.

Thompson and wife Verena live in Granbury and have four children and six grandchildren.