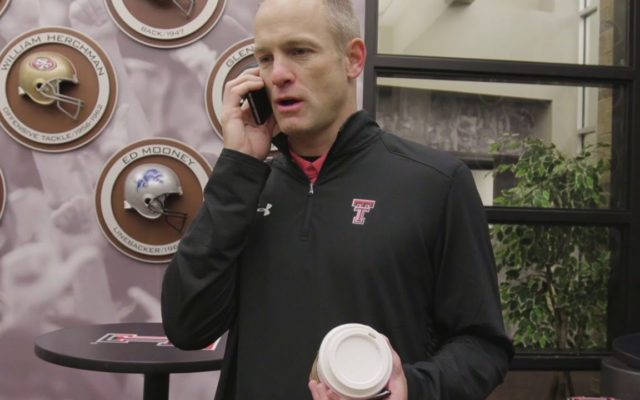 Randolph, who spent the past three seasons in a similar role at the University of Memphis, boasts over 20 years of collegiate coaching experience on the defensive side of the ball with stops at the likes of West Virginia, Alabama and Arizona State.

Randolph’s hire reunites him with new Tech defensive coordinator Keith Patterson as the duo previously worked together at Arizona State during the 2014-15 season. Patterson was the Sun Devils’ defensive coordinator those two seasons, while Randolph was the associate head coach and defensive line coach in 2014 and the Associate Athletics Director for Championship Life in 2015.

Randolph spent a total of four seasons at Arizona State, three as the associate head coach and co-defensive coordinator and then the final year in an off-the-field role. He moved from there to Memphis where the Tigers notched 26 wins and played in three bowls games during his tenure.

The Tigers turned into one of the country’s most opportunistic defenses during Randolph’s tenure as Memphis forced 81 turnovers during that span, which ranked fourth among teams nationally.  Memphis ranked among the nation’s elite defenses for takeaways in each of his first two seasons, finishing tied for fifth with 29 turnovers in 2016 and tied for third in 2017 with 31.

Since joining the Arizona State staff in 2012, Randolph has been part of three teams that have claimed a conference division title during that span as the Sun Devils won the 2013 Pac-12 South crown, while Memphis earned The American West Division title each of the last two seasons.

Arizona State posted a 28-12 overall record and 19-8 Pac-12 Conference mark during his three seasons as the associate head coach and co-defensive coordinator, all of which resulted in bowl trips. The Sun Devils boasted a pair of 10-win seasons over the 2013-14 campaigns, which featured a 14-4 record during Pac-12 play alone.

Randolph mentored five defensive linemen into All-Pac 12 honors during his tenure, namely Will Sutton, who was a 2012 consensus All-America selection and a two-time Pac-12 Defensive Player of the Year recipient. Sutton was Arizona State’s first consensus All-American since 2007 and became only the third defensive lineman in Pac-12 history to be named the Defensive Player of the Year in consecutive years since the league began awarding the accolade in 1980. Four of Randolph’s five All-Pac 12 performers were either drafted or signed NFL free agent contracts.

Over his three seasons, Arizona State featured one of the nation’s most disruptive defenses as the Sun Devils led the FBS in tackles for a loss (9.0 per game) and ranked second in sacks (4.0) in 2012. Arizona Stateranked in the top 20 for both categories in each of the next two seasons as well.

Arizona State marked Randolph’s fourth stop with then-Sun Devils head coach Todd Graham as he previously helped rebuild programs at Rice (2006), Tulsa (2007-10) and Pittsburgh (2011). Randolph oversaw linebackers at Rice before moving back to the defensive line in both stints at Tulsa and Pittsburgh.

His defensive line at Pittsburgh transformed into one of the nation’s elite units in only a season as the Panthers ranked third nationally with 3.31 sacks per game. Pittsburgh ended that season with an appearance in the BBVA Compass Bowl.

During his four seasons at Tulsa, Randolph, played an instrumental role in transforming the Golden Hurricanes into a perennial bowl team. Tulsa won 36 games during that time, including three bowl victories. Randolph helped mold a defense that led the country in interceptions and ranked third in forced turnovers during his final season in 2010.

In his lone season at Rice, meanwhile, Randolph was part of a staff that helped produce one of the most impressive turnarounds in recent college football history. The Owls closed the 2006 regular season with victories in six of their final seven games to earn their first bowl berth in 45 years.

Randolph began his coaching career as the linebackers coach at his alma mater, Tennessee-Martin, in 1998. He moved from there to positions at Valdosta State (1999), Illinois State (2000), Toledo (2001) and West Virginia (2002), the final three of which he oversaw special teams in addition to the defensive line.

Randolph was an all-conference linebacker at UT-Martin where he earned his degree in electrical engineering technology in 1990. He went to play eight seasons in the Canadian Football League with stops with Winnipeg (1988-95) and Montreal (1996-97).

Randolph served two years as a team captain and player-coach while in Montreal after helping lead Winnipeg to the Grey Cup championships in 1998 and 1990. He was inducted into the Blue Bombers’ Hall of Fame in 2002.

Huffman, who spent the past seven seasons as the Director of Football Operations at Washington State, returns to his alma mater to oversee the non-coaching aspects of the football program, including departmental budget, academics, team travel, summer camps and all other day-to-day operations.

This will be Huffman’s second stint on the Tech staff as he was previously the Director of Player Personnel during the 2008-09 seasons. Huffman served as the football program’s liaison with athletics compliance, while also assisting with Tech’s recruiting operations where he set up official and unofficial visits, campus tours and summer camps.

In addition, Huffman oversaw housing placement for each Red Raider student-athlete during his tenure and also worked closely with the academic staff at the Marsha Sharp Center for Student-Athletes. He added additional responsibility in 2009 as he supervised the presentation and maintenance of the aesthetics in the Football Training Facility.

Huffman orchestrated many of Tech’s community relations activities during his tenure, including the popular “Huff’s Huggables” charity drive he founded late in his playing career. “Huff’s Huggables” provided stuff animals to the Lubbock Police Department for officers to provide to local children during difficult moments.

Following his two seasons on staff, Huffman followed former Tech defensive coordinator Ruffin McNeil to East Carolina where he spent the 2010-11 seasons in a similar role with the Pirates. East Carolina played in the Military Bowl during McNeil’s first season as the program’s head coach.

Huffman departed East Carolina following the 2011 season to rejoin his former head coach Mike Leach at Washington State. He spent the first four seasons of his tenure as the Director of Football Operations before earning a promotion to Assistant Athletics Director after the 2015 season.

With the Cougars, Huffman oversaw the day-to-day operations of the football staff, namely team travel, the Cougar guest coach program and summer camps and clinics. He was also the football liaison for compliance, academics and student conduct throughout his tenure, which culminated with the Cougars winning 11 games in 2018, the most in school history.

A three-year starter at defensive back for the Red Raiders, Huffman completed his Red Raider career in 2006 with 189 tackles, four interceptions and 25 pass breakups. He was named the Defensive MVP in his final game as a Red Raider after picking off a crucial interception in Tech’s 44-41 come-from-behind victory over Minnesota in the 2006 Insight Bowl.

Huffman excelled academically during his time as a student-athlete, earning selections to prestigious honors such as the John Wooden Leadership Cup (2007), NCAA Leadership Conference (2006), Draddy Award (semifinalist in 2006) and the President and Dean’s List (2005-06). He earned his degree in human development and family studies from Tech in 2006 and has since pursued a master’s degree in sociology.

Huffman, a native of Hampton, Georgia, attended Garden City (Kan.) Community from 2001-03 before transferring to Tech. Following his collegiate career, he played one season for the Lubbock Renegades of the AFL2.

Huffman is married to the former Shelley Bartley of Lubbock. They are the parents of a son, Aeson Deon, and a daughter, Aniyah Jordan.

Kema arrives in Lubbock with significant experience in his role as the Associate Athletics Director for player development and student-athlete services after serving in a similar capacity for four seasons at Big 12 foe, Kansas.

The football program’s involvement in the Lubbock area will fall under Kema’s prevue as he will oversee the Red Raiders’ community service projects and life skills curriculum. In addition, Kema will serve as a mentor for each Red Raider during their time as a student-athlete.

Kema, who boasts a strong background in student-athlete advising, joined the Kansas football program as Director of Player Personnel and Student Services in 2015 where he helped prepare student-athletes for success after football. He was previously the Assistant A.D. for academic services at Texas A&M prior to his time in Lawrence.

In addition to his time at Texas A&M, Kema worked as an assistant director of academics at both Colorado (2003-06) and his alma mater, Utah State (2000-03). He is a member of the National Association for Academic Advisers for Athletics and belongs to the Minority Opportunities Athletic Association.

Kema played alongside Matt Wells during their final two seasons together at Utah State where he was a two-year starter at offensive guard and an Academic All-Big West first team honoree as a senior. Kema, who was named a team captain during his final season, transferred to Utah State from Dixie Junior College where he earned All-Western States first team accolades.

Kema graduated from Utah State with a degree in sociology in 1998. He later earned a graduate degree in educational counseling from the University of Phoenix.

Kema and his wife Stephanie have four children: Kailee, Noah, Malia and Isaiah.

Sawyer, who boasts over a decade of experience at the FBS level, previously served as the executive assistant to the head coach and assistant director of football directions at USF. She previously served in similar recruiting capacities at both Texas and Louisville.

Sawyer began her career as a student assistant for the Louisville Athletics Department and promptly moved to a graduate assistant role on the Cardinals’ football staff. She assisted in booking travel for coaches for recruiting trips, while also planning logistics for official visits to campus.

After two seasons in that role, Sawyer was elevated to a recruiting assistant where she helped oversee the social media outreach directed at recruits and the coordination of recruiting volunteers for Louisville events. She was also an integral part in Louisville’s efforts to bring former student-athletes to campus for alumni events and gameday recognitions.

In addition, Sawyer organized the community outreach for the football program, allowing the Cardinals to total over 1,000 hours of service each year in the Louisville area. She also assisted in the planning and execution of Louisville’s annual Pro Day event as well as its four bowl trips during her four seasons, which included the 2013 Allstate Sugar Bowl.

Sawyer departed Louisville in 2014 for the University of Texas where she spent three seasons as a special assistant to the head coach. She moved from there to USF, giving her experience with recruiting operations in both the state of Texas and Florida.

Sawyer earned her bachelor’s degree in health and human performance with a concentration in exercise science from Louisville in 2009. She obtained her master’s degree in sport administration a year later.