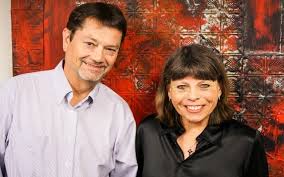 Is It Fair For Democratic Senators Running For President To Be On The Impeachment Jury?

Do You Think The US/Mexico/Canada Trade Deal Will Help Our Area Farmers & Ranchers?

Who Do You Think Will Win This Weekend's NFL Playoffs And Go To The Super Bowl?

Who Are Your Top 3 Favorite Music Groups Or Singers Of All Time?

What Are Your Three Favorite TV Game Shows Of All Time?

Start your day at home, at work or in your car with Tim & Kelli’s discussion of local, Texas and national news stories. Check out their topic of the day and call in your comments at 806-3500-710 or post them on the Tim & Kelli page here on kgncnewsnow.com.  David Lovejoy has local headlines,  “Doppler” Dave Oliver has the Storm Track 10 Supercast, Tim & Kelli have the latest sports info and Shannon Gray has an Agri-business update.

Tim Butler is a 42-year veteran of Amarillo Radio. Tim was born in Amarillo and graduated from Amarillo High School. He attended Amarillo College majoring in Radio and Television production. He is married to Michelle and their daughter Rachel works for IBM in Atlanta. Tim was the morning show co-host for many years on Amarillo’s Country 97.9 KGNC-FM.   Tim is active in many parades and broadcasts from many fund raising events in the Texas Panhandle area. Tim is an avid fan of the Dallas Cowboys, Chicago Cubs and Texas Rangers.

Kelli is a graduate of Monterey High School in Lubbock, and started off at Pre-law at Texas Tech, but fell in love with radio. She’s worked mornings in  Lubbock, Austin, Dallas, Chicago, San Francisco, back to Austin, then back to Lubbock and now joins Tim in Amarillo!!  Kelli loves to spend time with family, friends and animals……snow ski….write and paint.  She sky dived a few years ago, and wishes to again!  Kelli loves the mountains!  She’s fascinated by great white sharks and grizzlies. She even once did stand up comedy with Jerry Springer at The Funny Firm in Chicago