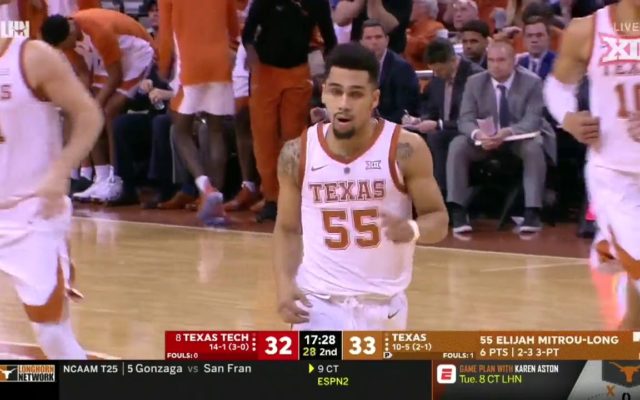 AUSTIN – You have to go back to the final year of the Southwest Conference to find the last time Texas Tech accomplished what it did on Saturday – win at the Frank Erwin Center.

Matt Mooney scored a season-high 22 points and Jarrett Culver went for 14 points and nine rebounds to lead the No. 8 Red Raiders to a 68-62 win over Texas for the first win in Austin since Feb. 24, 1996. In historic terms, Texas Tech ended a stretch of 22 straight Big 12 road losses to the Longhorns on their home court and for only the second time in program improved to 4-0 in Big 12 play (2003-04) and has only one loss through 16 games (1995-96). TTU also improved to 5-0 overall this season and 3-0 in conference play when trailing at halftime and is now 2-0 on the road in conference play.

“The main reason I’m happy for our guys is because I think we just beat a really good team that is going to be a part of the fight,” Texas Tech coach Chris Beard said. “I thought our guys played with a lot of poise. We didn’t feel like we were playing our best in the first half and made some adjustments at halftime. We had four guys in double figures, had a low-turnover game and competed on the boards. That’s how I think we won a close game.”

The Red Raiders (15-1, 4-0 Big 12) finished the game shooting 44.4 percent from the field with five second-half 3-pointers and were 13-for-17 at the free throw line. TTU, which is now 4-3 against Texas under Beard, was 7-for-8 from the line down the stretch, including two by Brandone Francis, Mooney and Tariq Owens to secure the win over the Longhorns (10-6, 2-2 Big 12). Texas was 23-for-57 from the field and was only the third team this season to shoot over 40 percent against the Red Raider defense which is now holding teams to 33.8 percent shooting for the season.

“We are a defensive team,” Beard said. “That’s our identity. Teams like Texas make it look like you can’t play defense from time to time. I thought our guys were dialed in for most of the game. We big block out and good rotation and close-outs.”

Mooney finished the game shooting 8-for-10 from the field, including going 3-for-3 on 3-pointers and with 14 of his 22 coming in the second half. He had a previous season-high of 17 earlier this year against Southern Cal and is now 11.4 points per game in his first season at Texas Tech. He would add five rebounds, two assists and two steals. Tariq Owens had four blocked shots for the second straight game and now has 13 blocks through four Big 12 games. Owens added 12 points on a 4-for-5 shooting night while Davide Moretti buried three 3-pointers and finished with 13 points. Norense Odiase secured eight rebounds, including a team-high four on the offensive side of the court. Culver, who has now scored in double figures in 15 of 16 games, recorded six assists for the third time this season and was one rebound away from his second straight double-double after he went for 23 points and 13 rebounds in the win over No. 23 Oklahoma on Tuesday.

“I knew someone was going to have to step up and I had some open looks and I was able to knock them down,” Mooney said. “We had to get it going offensively with only 26 points at half.”

Texas Tech led 55-48 after an Odiase dunk that followed a Moretti 3-pointer and a Culver jumper. The 7-0 run by the Red Raiders gave them their biggest advantage of the game after leading 48-43 with 10 minutes remaining on an Owens dunk after two straight baskets by Mooney. The Red Raiders went on a previous 7-0 that was capped with a Owens dunk that came after a Mooney layup and a four-point play by Moretti who was fouled on a 3-pointer and then made the free throw. The run gave TTU a 40-35 lead five minutes into the half after being down four at halftime. Mooney gave the Red Raiders an immediate spark in the second half by hitting two 3-pointers to open half to give the Red Raiders a 32-30 lead.

Texas Tech trailed 30-26 at halftime after shooting 10-for-28 from the field and only 2-for-5 on 3-pointers. Mooney led the team with eight points and three rebounds at the half, while Culver, Owens and Moretti each had six for the Red Raiders. Mooney was 3-for-5 from the field with one 3-pointers and Owens had three first-half blocks. TTU started game 2-for-10, but led 4-2 at first media timeout with Texas starting 1-for-5. A 9-0 run by the Longhorns had them leading 16-11 before two free throws and a dunk by Owens followed by a Moretti jumper to give the Red Raiders a 19-18 lead. Mooney would hit his 3-pointer to give the Red Raiders a 23-21 lead with 3:23 remaining and Moretti hit his to tie it at 26. The Longhorns closed the half on a 4-0 run with two free throws and a layup.

Kerwin Roach II led the Longhorns with 17 points and also added five assists, while Jaxson Hayes had 15 points and five rebounds. Dylan Osetkowski provided nine rebounds and Jase Febres had 12 to lead the UT bench. The Longhorns shot 40.4 percent from the field and were 7-for-20 on 3-pointers against the TTU defense.

Texas Tech will now host No. 20 Iowa State at 8 p.m. on Wednesday at the United Supermarkets Arena before playing at Baylor next Saturday. The Red Raiders are currently 10-0 at home this season, 1-0 in Big 12 play at home after the win over Oklahoma and are 43-4 at home under Beard. The Cyclones (12-4, 2-2 Big 12) are coming off a 73-70 loss at Baylor on Tuesday and a 58-57 loss to Kansas State on Saturday.