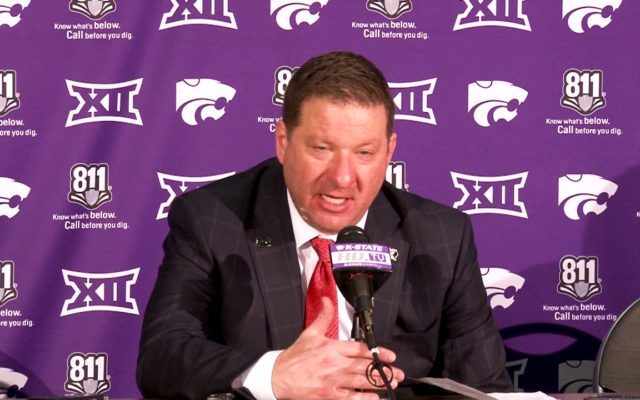 MANHATTAN, Kan. – Kansas State earned a 58-45 Big 12 Conference win over No. 14 Texas Tech on Tuesday after shooting 46.3 percent from the field and limiting the Red Raiders to a season-low 32.7 percent at the Bramlage Coliseum.

The Red Raiders (15-4, 4-3 Big 12) won the first matchup against the Wildcats by a 63-57 margin on Jan. 5 in Lubbock, but have now lost three in a row with KSU (15-4, 5-2) shooting the highest percentage an opponent has this season against them. The Wildcats have won five in a row since dropping the decision at TTU.

Jarrett Culver led the Red Raiders with 17 points, seven rebounds and five steals, while Tariq Owens added 12 points with two 3-pointers. Davide Moretti also had two 3-pointers and finished with six and five players scored two points each. Texas Tech finished the game shooting 16-for-49 from the field and were only 5-for-23 on 3-pointers. KSU was 19-for-41 from the field and also went 15-for-22 from the free-throw line as it improved to 10-1 at home.

“First of all it is about K-State’s defense,” Texas Tech coach Chris Beard said. “One team this year has broken 70 on them. We knew it was going to be a difficult game to score so we set up a game plan. We have to score on different levels to play against teams like this. You have to get some points off your fast break and we had very few. We had to get points off our secondary break. We had very few. You have to score points off your defense and we had a few in the first half. I thought our guys were dialed in and played really hard in the first half. We just did not make enough shots.”

Texas Tech trailed by eight at halftime and wouldn’t be able to cut the deficit to under six throughout the second half. A Moretti 3-pointer made it 51-43, but besides a Culver layup with 30 seconds remaining that was all the Red Raiders were able to score against the Wildcats. TTU would go 8-for-25 (32 percent) in the second half and were only 2-for-3 at the free-throw line in the second half.

Moretti had also stopped a 7-0 run by KSU by hitting a 3-pointer with 10 minutes to play followed by two Culver free throws to cut the deficit to eight at the 9:35 mark. That margin stuck until KSU’s Dean Wade hit two free throws with 6:42 to play for a 48-38 game followed by a Stokes 3-pointer. Matt Mooney would respond for the Red Raiders with his first basket of the game and the first Red Raider points in four minutes to make it 51-40 with 5:37 but the team was unable to continue momentum.

Down eight at halftime, the Red Raiders stayed in the game early in the second half with Culver making a pair of jumpers and Owens hitting his second 3-pointer of the game to make it 39-33 with 16 minutes to play. The Wildcats would push it to nine though with Mike McGuirl hitting a 3-pointer and then had a 44-33 lead on a Barry Brown layup with 11:06 on the clock. The Red Raiders were 4-for-10 from the field with three turnovers in the opening nine minutes of the second half before Moretti’s 3-pointer stopped KSU’s run and made it 46-36 with 10 minutes to play.

Texas Tech trailed 32-24 at halftime after being limited to 8-for-24 shooting (33.3 percent) from the field and going 2-for-9 on 3-pointers. Culver led the Red Raiders with nine points and five rebounds in the half, while Owens had seven points and Corprew added three rebounds. Owens, who came off the bench for the first time this season, scored seven of the first 11 points for the Red Raiders in the game. Brown led Kansas State with 11 points and three rebounds in the opening half where the Wildcats were 12-for-22 from the field and had a 15-11 rebounding advantage.

“They made shots,” Beard said. “They were very aggressive, they got to the free throw line and late in the game when we were trying to come back from a deficit they got good looks. If you look at the first 32 minutes or so we played okay defense. K-State was really hitting shots tonight.”

Kansas State started the contest on a 7-2 run with the Red Raiders committing three turnovers and going 1-for-5 from the field. TTU stopped that run coming out of a timeout with Mooney lobbing a pass up to Owens for a dunk followed by Owens hitting his third 3-pointer of the season to tie the game. The Red Raiders were on a 7-0 run of their own with a pair of Francis free throws for their first lead of the game.

Texas Tech led 15-13 on a Deshawn Corprew tip-in with 10:09 remaining in the first half but would not make a basket again until a Culver 3-pointer with 1:38 to play in the half. KSU went on a 15-3 run during that time with the Red Raiders going 1-for-9 from the field. A pair of Culver free throws and Edwards going 1-for-2 at the line was all the Red Raiders scored during the stretch before the 3. Culver would made a layup with 1:08 to play and Edwards hit one of two free throws for the final points of the first half. The Red Raiders would go into the locker room at halftime trailing for the sixth time in seven conference games this season.

Texas Tech will return to action against Arkansas at 5 p.m. on Saturday in the Big 12/SEC Challenge at the United Supermarkets Arena. The Red Raiders are currently 10-1 at home this season and has won 46 straight non-conference home games dating back to a 100-69 win over Mount St. Mary’s on Dec. 30, 2013 at the USA