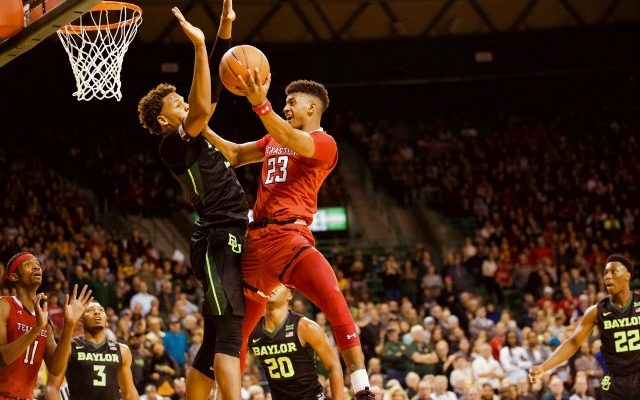 Texas Tech (15-3, 4-2 Big 12) led by as many as 13 in the first half, but lost for the second straight game for the first time this season after starting the week with a loss to Iowa State. Baylor (11-6, 3-2 Big 12) has now won two in a row after going on the road and knocking off Oklahoma State on Monday and improved to 8-3 at home with the win. The 11 3-pointers by the Bears were the most by a TTU opponent this season.

“We had too many turnovers,” Texas Tech coach Chris Beard said. “It was like we were just going down the court and handing the ball over to Baylor. Today they beat us with the 3-point shot, we turned the ball over too much and they out-rebounded us. You just can’t hand the ball to the other team 17 times and expect to win on the road against a really good coach and a really good team.”

The Red Raiders will now play at Kansas State at 6 p.m. on Tuesday before returning home to host Arkansas at 5 p.m. on Saturday, Jan. 26 at the United Supermarkets Arena. TTU earned a 63-57 win over the Wildcats in the first meeting between the two teams on Jan. 5 in Lubbock, but KSU has now won four straight after 65-55 win over TCU on Saturday.

Jarrett Culver led the Red Raiders with 19 points, nine rebounds and five assists in the game, while Brandone Francis scored a season-high 14 points after hitting three 3-pointers in the second half and also making three free throws. Davide Moretti scored in double-figures for the sixth straight conference game with 13 points, including going 6-for-7 at the free-throw line and Tariq Owens provided eight points and six rebounds. Culver, who had three steals but also seven turnovers, would score the last nine points of the game for the Red Raiders and is now averaging 17.2 points and 10.0 rebounds per game in Big 12 play this season.

Texas Tech finished the game shooting 46.7 percent from the field and was 15-for-19 at the free-throw line, but struggled with possession with 17 turnovers and stopping the Bears from beyond the arc. Baylor finished the game 11-for-29 on 3-pointers, including Makai Mason going 4-for-7 for 16 points and King McClure and Jared Butler hitting two each. Butler led the Bears with 19 points and also had five assists, while Mark Vital led the team with eight rebounds to go along with five assists and six points.

Texas Tech made a 11-0 run to cut it to 55-53 with six minutes after Francis converted an and-one after a 3-pointer for a quick six points to get as close as it would to making a second-half comeback. Baylor responded though with Butler hitting a 3-pointer, the 11th of the game for the Bears, and then a jumper to take a 60-53 lead with 3:46 remaining. Culver would hit a 3-pointer and a tough shot in the lane to cut it to 63-58 with two minutes to play. He’d answer a Baylor basket with another layup, but the Bears would continue hitting free throws with Makai Mason and Freddie Gillespie both going 4-for-4 at the line in the final two minutes. BU was 14-for-16 at the free-throw line in the second half, while TTU went 5-for-7.

“We are just going to continue to fight and scrap,” Beard said. “These games are tough to win. Today I’m just disappointed. I thought we beat ourselves in a lot of ways.”

Baylor started the second half on a 6-0 to take an eight-point lead before Culver made the first Red Raider basket of the half. The Bears started the second half shooting 3-for-4 from the field three minutes in and were 2-for-2 at the free-throw line after not getting there for the first 20 minutes. Texas Tech trailed 50-42 with 11 minutes remaining after a McClure 3-pointer that gave the Bears 10 3s for the game. Baylor was on another run, this time 8-0, before Moretti was fouled shooting a 3-pointer and made all three to cut the deficit to 55-45 with eight minutes to play.

Texas Tech trailed 33-31 after leading by as many as 13 in the first half against Baylor which made its comeback by hitting seven 3-pointers and closing the half on a 9-2 run. Moretti led the Red Raiders with eight points in the opening half, while Culver had six points, four assists, four rebounds and three steals. TTU was 9-for-21 from the field with three 3-pointers and Baylor was 13-for-34 with its seven 3-pointers. The Red Raiders were 10-for-12 from the free-throw line but had eight turnovers, while Baylor did not take a free throw in the first 20 minutes of play but led two fewer turnovers and four more 3-pointers.

Francis finished the first half with seven points, including two straight 3-pointers to give the Red Raiders a 19-7 that capped 13-3 run. Texas Tech started the game shooting 7-for-9 from the field and led 19-10 eight minutes with Baylor shooting 4-for-13. Mason was leading BU at halftime with nine points after going 3-for-4 on 3-pointers, while McClure had eight on two 3s.

Texas Tech and Baylor will play again on Saturday, Feb. 16 at the United Supermarkets Arena.