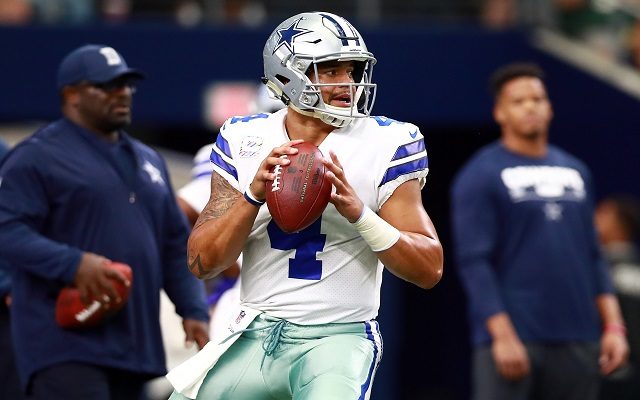 ARLINGTON, TX - OCTOBER 08: Dak Prescott #4 of the Dallas Cowboys prepares to take on the Green Bay Packers at AT&T Stadium on October 8, 2017 in Arlington, Texas. (Photo by Tom Pennington/Getty Images)

Lamar Jackson threw for two touchdowns and ran for a third as the Ravens beat the Cowboys 34-17 in Baltimore.

Jackson threw for 107 yards and ran for 94 more as Baltimore improved its record to 7-and-5. As a team, the Ravens ran for 294 yards, a season high.

Miles Boykin and Marquise Brown each caught touchdown passes in the win. Andy Dalton threw for 285 yards, two touchdowns and an I-N-T in the loss. Dallas falls to 3-and-9.

Ravens wide receiver Dez Bryant is positive for COVID-19. He tweeted the news yesterday about a half-hour before kickoff against his former team, the Cowboys.

The Ravens said he was scratched due to illness. Bryant then said he was quitting, but changed his mind.