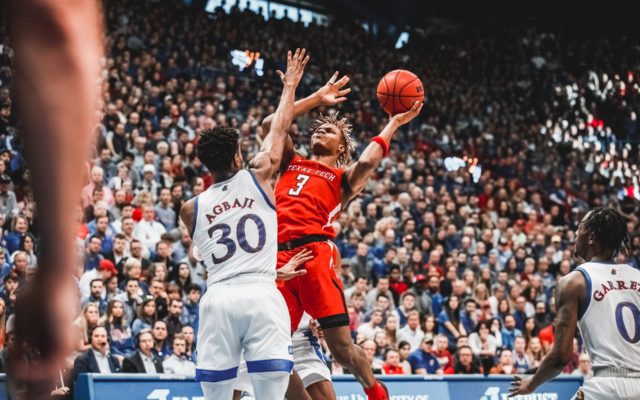 LAWRENCE, Kansas – Texas Tech turned an early 15-point deficit into a one possession game at the end but was unable to complete the comeback as No. 3 Kansas secured a 78-75 win on Saturday at the Allen Fieldhouse.

The Red Raiders (13-8, 4-4 Big 12) were down three and with the ball with 14 seconds remaining on the final possession before Jahmi’us Ramsey missed a contested layup that was rebounded by the Jayhawks (18-3, 7-1 Big 12) as the buzzer sounded. Down 44-38 at halftime, the Red Raiders closed to within two for the first time at 57-55 after a Terrence Shannon, Jr. layup, TJ Holyfield 3-pointer and a Kyler Edwards layup for a 7-0 run. KU answered with a 9-0 run though before Tech was able to claw back again and were down 76-75 on a Ramsey layup with 26 seconds remaining. KU’s Ochai Agbaji was fouled and made both free throws with 14 seconds remaining to put the Jayhawks up three before Ramsey’s layup was blocked by Marcus Garrett with two seconds on the clock and Agbaji secured the rebound and win for KU.
Texas Tech and Kansas will meet again in the regular-season finale on Saturday, March 7 at the United Supermarkets Arena.

Ramsey led Texas Tech with 26 points after hitting five 3-pointers for the second straight game and the fourth time this season, while Terrence Shannon, Jr. had a career-high 11 rebounds and also had nine points in their first games at KU. TJ Holyfield added 19 points, eight rebounds and had a season-high four blocked shots for the second straight game. Holyfield had a career-high three 3-pointers for the Red Raiders who hit 7 of 12 3-pointers in the second half, including Ramsey finishing the game at 5 of 8.
Ramsey’s 26 points were one point shy of his career-high of 27 against Long Island and helped the Red Raiders keep answering Jayhawk runs throughout the game. A freshman from Arlington, Ramsey was coming off scoring 21 points against West Virginia where he matched his career-high with five 3-pointers and finished the second half against KU shooting 3-for-4 from beyond the arc. He’s now scored 20 or more points in three conference games and in six games overall, while Holyfield leads Tech with 26 blocked shots through 21 games.

Davide Moretti finished the game with nine points with one 3-pointer, while Kyler Edwards joined Shannon with eight points and led the team with six assists. Chris Clarke was limited to six minutes of play in the first half with an ankle injury he suffered in the win over West Virginia on Tuesday, while Kevin McCullar did not make the trip as he progresses through concussion protocol from a fall against Kentucky. The Red Raiders finished the game shooting 42.6 percent from the field, were 9 of 21 on 3-pointers and 14-for-18 at the free-throw line, while committing only nine turnovers. KU shot 51.7 percent from the field, but was limited to only 4-for-13 on 3-pointers.

Devon Dotson led Kansas with 21 points after going 9-for-16 from the field, while Marcus Garrett had 15 and Isaiah Moss finished with 12 to lead the reserves. KU was 14-for-20 from the free-throw line and finished the game with nine blocked shots, led by Garrett and David McCormack who had three each. The Jayhawks finished the game with a 36-33 rebounding advantage and outscored the Red Raiders by a 38-28 margin in the paint. With Clarke out for the final 34 minutes and McCullar not available, Kansas had a 20-5 advantage in bench scoring in the game.

Kansas jumped out to a 17-2 lead and took a 44-35 advantage to halftime with the Red Raiders cutting the 15-point hole to two at one point in the half. Ramsey led the Red Raiders with 14 points after hitting two 3-pointers and going 4-for-4 from the free-throw line, while Edwards had four points and Holyfield and Moretti had four each. Tech was limited to 13-for-34 (38.2 percent) from the field and 2-for-9 on 3-pointers, while KU was at 55.2 percent from the field and also had three 3-pointers. Down 17-2 early in the game, Tech would fight back and cut it to single digits with Clarence Nadolny making a layup to make it 22-13. The Red Raiders went on a 7-0 run with Shannon making a layup and then a Ramsey jumper and two free throws to make it 26-24. KU finished the half on a 4-0 run and having made seven of its last nine shots. Dotson led the Jayhawks with 13 points and Agbaji and Garrett had seven each.

Texas Tech will return to action at 8 p.m. on Tuesday against Oklahoma (14-7, 4-4 Big 12) at the United Supermarkets Arena for the first match up of the season between the two programs. OU will be coming off an 82-69 win over Oklahoma State on Saturday. The Red Raiders earned a season sweep of the Sooners last season and have won three straight. OU owns a 44-22 all-time advantage in the series, but is 13-17 in Lubbock coming into Tuesday’s game. Tech is currently 10-2 at home overall and 3-1 in Big 12 play with wins over Oklahoma State, Iowa State and No. 12 West Virginia this season.