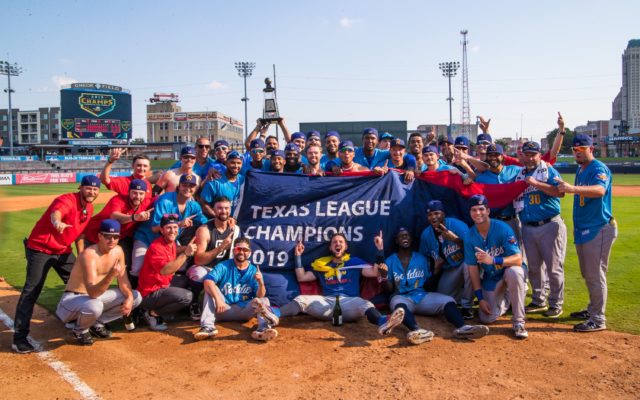 (Tulsa, Oklahoma) – With their backs to the wall, down 3-1 heading into the ninth inning, the Sod Poodles rallied to load the bases with no outs. On a 2-2 pitch, Taylor Trammell answered the call with a go-ahead grand slam to lead the inaugural Amarillo squad to their first Texas League title in nearly four decades. The Sod Poodles completed the top of the ninth with seven unanswered runs and won the decisive game five over the Tulsa Drillers by a final score of 8-3. The league title marks the first for Amarillo since the inaugural season of the 1976 Gold Sox, who were also the Double-A affiliate of the San Diego Padres.

(Landover, MD) — Dak Prescott passed for 269 yards and three touchdowns in the Cowboys’ 31-21 win over the Redskins in Landover. Jason Witten, Amari Cooper and Devin Smith had TD catches as Dallas moved to 2-and-0. Ezekiel Elliott ran for 111 yards on 23 carries in the win. Case Keenum passed for 221 yards and two TD’s for Washington. Adrian Peterson was limited to 25 yards on 10 carried, but did have a touchdown for the Redskins, who fell to 0-and-2. Listen for the Dallas Cowboys Hour with Brad Sham this evening at 6 on 710AM and 97.5FM KGNC.

(Houston, TX) — Justin Reid prevented Leonard Fournette from crossing the goal on a two-point conversion attempt with 30 seconds left as the Texans held on for a 13-12 win over the Jaguars in Houston. J.J. Watt recovered a fumble in the fourth quarter to set up a Deshaun Watson one-yard touchdown run to give the Texans a 13-3 advantage. Ka’imi Fairbairn kicked field goals of 39 and 22 yards for Houston, which is 1-and 1. The Texans will play this coming Sunday at the Chargers.

(Kansas City, MO) — Josh Reddick had a career high five-hit game with a homer, three runs and three RBIs as the Astros crushed the Royals 12-3 in Kansas City. Yuli Gurriel and Kyle Tucker also homered, while Abraham Toro drove in three runs for Houston, which swept the series. Wade Miley, who failed to get out of the first inning in his previous two starts, navigated his way through six innings, giving up two runs. The Astros are off today before opening a homestand tomorrow night with Justin Verlander starting against the Rangers.

(Arlington, TX) — Shin-Soo Choo had three of the Rangers’ five hits in a 6-1 loss to the Athletics in Arlington. Jonathan Hernandez failed to make it through three innings, permitting three runs to take the loss. The A’s swept the three-game series. Texas is off today before opening a series tomorrow night in Houston with Lance Lynn starting.

(Frisco, TX) — The Chicago Fire shut out FC Dallas at Toyota Park. Dallas and Portland each have 43 points, while San Jose has 44 and the LA Galaxy 45 in a battle royale for MLS Western playoff berths. Dallas will try to rebound Wednesday when it faces the Sounders in Seattle.

(Dallas, TX) — SMU clobbered Texas State 47-17 at home Saturday to start 3-and-0 for the first time since 1984. The Mustangs won their first four that year, a feat they will try to duplicate when they play at rival TCU this coming Saturday in Fort Worth. The Frogs are also unbeaten, coming off a 34-14 victory at Purdue.

(Undated) — In other college football action this past weekend, number-13 Texas mauled Rice 45-38 in Houston, Texas Tech fell 28-14 to Arizona in Tucson, number-15 Texas A&M demolished Lamar 62-3 and North Texas lost 23-17 at number-23 Cal. The West Texas A&M Buffs beat William Jewell 49-21.  This coming Saturday, the Longhorns will host Oklahoma State, the Aggies will welcome number-nine Auburn to College Station, the Mean Green will face UTSA in Denton, while Baylor, which had the weekend off, will be at Rice. The Red Raiders take this week off.