Join KGNC in Celebrating 100 Years in the Texas Panhandle 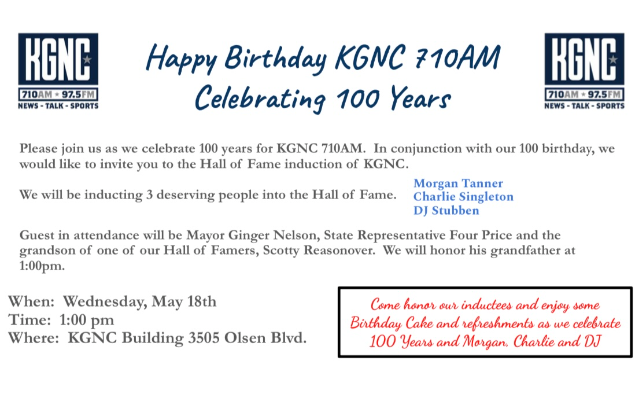 Over the next few weeks KGNC will be celebrating our 100th birthday, and we want you to join us!

KGNC began broadcasting to the Amarillo area as WDAG on May 19th, 1922 with just 10 watts of power.

In 1935 the station was bought by the Globe News Publishing Company, changing its callsign to KGNC for the first time.

Wednesday, May 18th KGNC will be hosting our official 100th birthday bash, along with inducting three deserving people into our Hall of Fame.

The induction ceremony will take place at 1pm at our studio located at 3505 Olsen Boulevard, with the birthday festivities set to begin shortly after that.

We also invite you to join us for another celebration Saturday, June 11th at the Amarillo Community Market hosted by Center City of Amarillo.

If that wasn’t enough, we will be at the Amarillo Crawfish Festival Saturday, June 11th at Starlight Ranch.

Tickets are $30 for general admission, and will include two pounds of crawfish, live music from Touching Voodoo and Bad Moon Rising, face painting, photo booths and more!

Be sure you listen in the coming weeks for your chance to win tickets.