DALLAS, TX - JULY 08: Texas Governor Greg Abbott speaks at Dallas's City Hall near the area that is still an active crime scene in downtown Dallas following the deaths of five police officers last night on July 8, 2016 in Dallas, Texas. Five police officers were killed and seven others were injured in the evening ambush during a march against recent police involved shootings. Investigators are saying the suspect is 25-year-old Micah Xavier Johnson of Mesquite, Texas. This is the deadliest incident for U.S. law enforcement since September 11. (Photo by Spencer Platt/Getty Images)

After daily testing, Texas Governor Greg Abbott was given his first positive result.

He wants to ensure Texans that he is feeling ok, in good communication with his staff, and is ensuring that the government will run smoothly.

He is isolating in the Governors Mansion, and will continue to test daily.

The full press release can be found below. 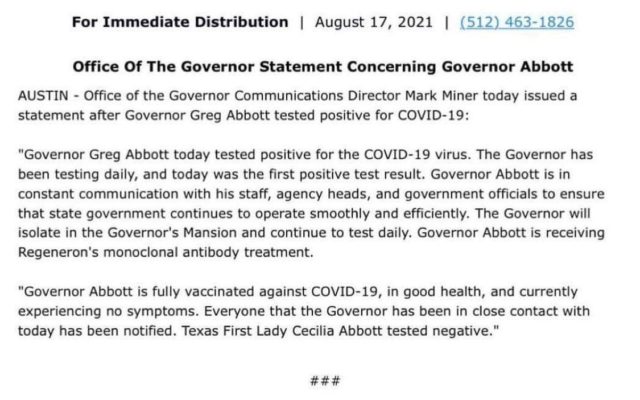