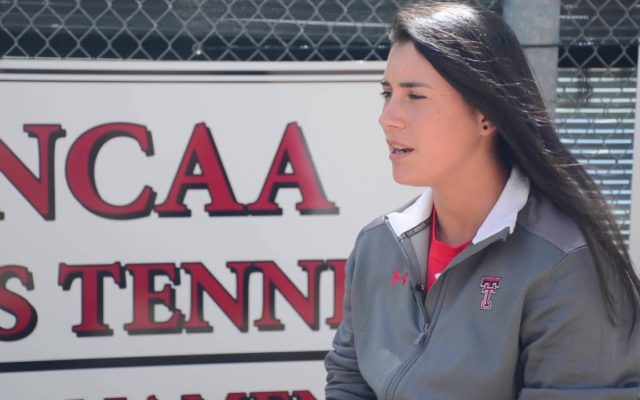 LUBBOCK, Texas – After concluding the greatest collegiate women’s tennis career in Texas Tech history, Gabriela Talaba is one of the shining stars on the professional tour.

Talaba wrote her name into the records book, improving on the previous year continuously. She was a part of the winningest and most decorated class in school history. The Lady Raiders posted a 96-25 record over the four seasons while Talaba finished with an 83-30 singles record and 74-34 doubles record.

After an outstanding junior season, Talaba was named the program’s first-ever ITA All-American. She followed that up with her second All-America honor in May.

“Gabby was a great ambassador to Texas Tech and will continue to be. She was our first All-American and represented the Double T with class. She really help put Texas Tech on the map,” Head Coach Todd Petty said.

Talaba has been on the pro circuit since June. In just six months, she has jumped her WTA ranking dramatically. She is now the No. 354 ranked player in doubles and the No. 402 ranked player in singles.

“Because I finished college in May, I had to start playing on the pro circuit in the middle of the season and that is a challenge. After the summer, I had no pressure of defending any points for being able to keep up a ranking and all the tournaments I played counted,” Talaba said.

Her performance in her first season playing on the pro circuit and been nothing short of impressive.

In her first six months, Talaba has won three doubles titles and two singles titles. She has also made the final in five events and the quarterfinal in nine of the 13 events she has played.

At the beginning of October, Talaba captured her first 25K singles title at the Charleston, S.C., 25K event. She won seven-straight matches to clinch the singles title over Elizabeth Halbauer (USA). Talaba was close to sweeping both titles at the event, but fell in the doubles final match.

“There’s a special feeling whenever I win a tournament. Even though I won a few tournaments in the past, it seems like this year it has been different. Now that I’m actually playing to advance in the rankings and to take the money, it feels much better.

“The competition has always been challenging at every level in the pro tour and there’s no question about that. Whenever I win a tournament, there’s a feeling that I can do more, I can win tougher matches against top-ranked opponents, and I can play in bigger tournaments for more points and money. When I won my first title this year, I had all those feelings and thoughts come together,” Talaba said.

Talaba swept the doubles and singles titles during the 15K event in Marbella, Spain. She began her day with a 6-2, 6-2 sweep in doubles with her partner Claudia Hoste Ferrer (ESP) before finishing the double-crown week with a 6-2, 6-2 win over Aleksandrina Naydenova (BUL).

“I had a great tournament in Marbella, Spain. Winning in both singles and doubles in the same week is not easy and it feels amazing once you do that,” Talaba said. “I had to play both the semifinal and the final matches in singles in the same day, only at an hour and a half distance from one another due to rain delays. It was definitely a physical and mental tournament that came after a period of three weeks of good training.”

Talaba won her first title of the season at the 25K event in Horb, Germany. She and doubles partner Oana Georgeta Simion (ROM) captured the doubles title with a 6-3, 6-0 win.

Talaba won her first-ever pro circuit title in 2015 at the Galati, Romania, 10K event with partner Oana Georgeta Simion. Since then the two have combined for five doubles titles in the last four years.

Talaba could have easily gone pro right out of prep school, but she decided to come to Texas Tech and play for Petty.

“I think first Gabby understood the value of an education. Secondly, she was mature enough to understand where she was with her game and at such a young age. It was more about her development as a player rather than the results in the moment,” Petty said. “She never lost sight of where she wanted to be, but truly understood the process and was willing to let it unfold rather than rush it.”

Talaba credits a friend from Romania in helping her decide to attend college.

“I decided to come to college during the summer after my high school graduation in 2014 because of the low financial opportunities I had at home,” Talaba said. “I had one of my Romanian friends, who previously played collegiate tennis for Texas A&M, explain to me how it all was at the college level in America and all the benefits you get as a student-athlete. All that convinced me and my coach from home that this is a much better option than trying to play professionally right away.”

In her four years with Petty, Talaba learned many valuable lessons that extend to her professional playing career.

“The level of competition at the collegiate level is very high and many people do not even realize that. I learned many things while I competed in college. One of the most important is how to be a teammate and not play for myself but for everyone else. I feel that my game is more aggressive now and I got to accumulate more experience by playing in so many college matches,” Talaba said.

Talaba ended her career with three other players who were the most decorated and successful classes in Tech history.

“Last year’s senior class obviously leave Tech as the most decorated, but they have meant so much more. Each senior class I have had here has been able to move the needle past what the last was able to do. Last year’s class did just that at an elite level.  On top of that, the way they represented Tech on all areas is amazing.  This senior class graduated with a 3.75 GPA and have moved on to do amazing things in their communities.”