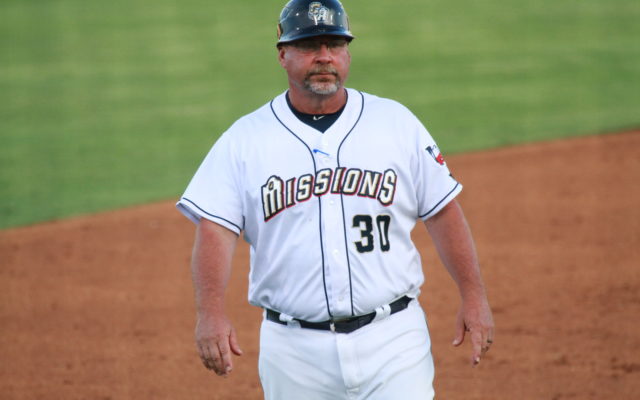 (Amarillo, Texas) — The Amarillo Sod Poodles in conjunction with the San Diego Padres announced Thursday that Phillip Wellman will serve as the team field manager for the inaugural 2019 season. Accompanying Wellman will be pitching coach Jimmy Jones, hitting coach, Raul Padron, coach Freddy Flores, athletic trainers Nick Coberly and Drew Garner, and strength & conditioning coach Drew Heithoff. Wellman returns for his fourth season in the Padres organization managing their Double-A affiliate. The 2019 season will be Wellman’s 31st as a coach and 20th as a minor league manager. The 2017 Texas League Manager of the Year piloted the 2018 Missions to a 71-67 record (.514), clinching their second consecutive playoff bout and leading the squad to their first Championship series appearance since taking the league title in 2013.

(Los Angeles, CA) — The Cowboys will face the Rams tomorrow in a NFL playoff game at the LA Coliseum. The two have split eight playoff games, but have not met in the postseason since January 1986, a Rams’ 20-0 win in Anaheim. Dallas last won a road playoff game in 1993. The Cowboys will have to deal with the Rams’ Aaron Donald, who led the NFL with twenty-and-a-half sacks. Dallas punt returner Tavon Austin played his first five NFL seasons with the Rams. Our pregame coverage begins Saturday evening at 6 on 710AM and 97.5FM KGNC.

(Frisco, TX) — Wide receiver Cole Beasley and tight end Blake Jarwin have not practiced this week because of ankle injuries. The Cowboys list both as questionable for the game tomorrow against the Rams. The team will make a game day decision on whether they will play. Guard Xavier Su’a-Filo and defensive tackle Maliek Collins are also listed as questionable with ankle issues, but are expected to play. Defensive lineman David Irving is the only Cowboy already ruled out.

(Undated) — The NFL playoffs resume this weekend with the Divisional Round. Tomorrow, the Colts clash with the Chiefs in Kansas City and the Cowboys rumble with the Rams in LA. On Sunday, the Chargers play the Patriots in Foxboro and the defending Super Bowl champion Eagles visit the New Orleans Saints. Our Sunday pregame coverage begins at 11:30.

(San Antonio, TX) — LaMarcus Aldridge racked up a career-high 56 points as the Spurs outlasted the Thunder 154-147 in a double-overtime thriller in San Antonio. The Spurs finally pulled away in the second OT after OKC rallied in regulation. Derrick White scored a career-high 23 points for the Spurs and Marco Belinelli added 19 off the bench. San Antonio shot 16-of-19 from three, a new NBA record for efficiency with at least 15 attempts. Russell Westbrook keyed OKC with 24 points, 24 assists and 13 rebounds. Paul George dropped in 30 points as the Thunder fell to 25-and-16.

(Houston, TX) — The Rockets return home tonight to meet the Cavaliers. Houston is 7-and-2 in its last nine games. The Rockets are in second place in the Southwest Division with a 23-and-17 record. Cleveland has lost 11 straight and has the worst NBA record at 8-and-34.

(Philadelphia, PA) — The Flyers ended an eight-game losing streak with a 2-1 win over the Stars in Philadelphia. Jamie Benn scored the Dallas goal with just less than three minutes to play. Anton Khudobin had 20 saves in defeat. Dallas is 5-2-and-1 in its last eight games. The Stars return home tomorrow against the Blues.

(Chicago, IL) — FC Dallas owns two first-round picks in the MLS SuperDraft that begins today in Chicago. Dallas has the fourth and 10th overall selections. They do not have a second-round selection, but have the 63rd overall pick in the third round. They possess two fourth-round picks, 87th and 88th overall.

(Undated) — In area college basketball, SMU lost 76-64 at UConn, North Texas won 58-51 at UTEP as the Mean Green moved to 16-and-1 and UT-Arlington won 82-72 at Appalachian State in a Sun Belt game. Tomorrow, Baylor welcomes number nine Kansas to Waco, Texas A&M is at Alabama and number eight Texas Tech meets Texas in Austin, SMU will host Tulsa, North Texas will be at UTSA and UT-Arlington will play at Coastal Carolina.