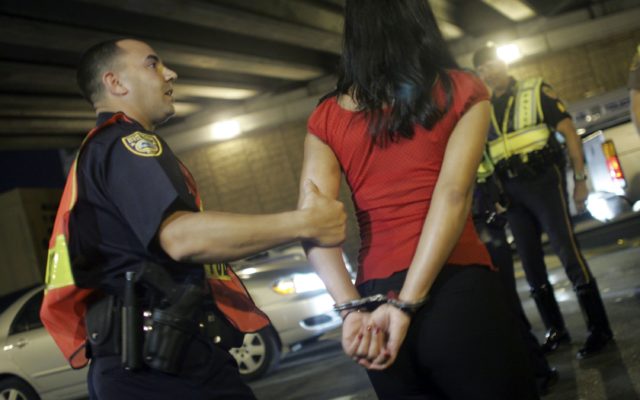 MIAMI - DECEMBER 15: Officer Kevin Millan from the City of Miami Beach police department arrests a woman after she failed a field sobriety test at a DUI checkpoint December 15, 2006 in Miami, Florida. According to police, the woman failed a breathalyzer test by blowing into the device and receiving two readings one at .190 the other .183, which is twice the legal limit in Florida. The city of Miami, with the help of other police departments, will be conducting saturation patrols and setting up checkpoints during the holiday period looking to apprehend drivers for impaired driving and other traffic violations. (Photo by Joe Raedle/Getty Images)

The Texas Department of Public Safety is urging everyone to end 2021 safely as they head out on the roads for the holidays.

They’re wanting everyone to know they will be out and about on area highways with their law enforcement campaigns starting December 23rd and looking for speeders and not wearing seat belts, driving while intoxicated or committing other traffic violations.

DPS offers the following tips for making the holiday a safe one. Don’t drink and drive, Make alternate plans if you’re consuming alcohol, move over or slow down for police, fire EMS and tow trucks stopped on the side of the road. Between January 1st and December 14th, DPS issued over 12-thousand tickets and warnings.

Buckle up ever6yone in the vehicle and eliminate distractions. that means mobile devices. Texas law prohibits the use of portable devices to read, write or send electronic messages unless the vehicle is stopped.

Make sure you get plenty of rest, don’t drive fatigued.

Last year during the holiday enforcement period, 116-thousand citations and warnings were issued. This included over 14-thousand for speeding, over 16-hundred for seat belt violations, Driving without insurance, and Move Over, Slow down Violations. In addition to !-thousand 185 felony arrests, 619 DWI arrests and 355 fugitives arrested.