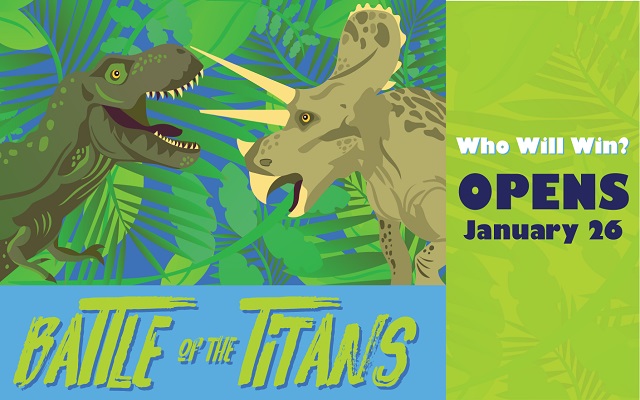 The Don Harrington Discovery Center is opening up their newest Spring 2019 traveling exhibition.

The Battle of the Titans features two prehistoric opponents the Triceratops and the Tyrannosaurus Rex in a boxing match style exhibit.

Visitors will learn that not only were they perfectly matched to fight each other, but they depended on each other to survive as a species.

Dr. Aaron Pan, Executive Director of the Don Harrington Discovery Center says “We are so excited to be the first U.S. venue for this new exhibit which explores the last and most iconic dinosaurs that have ever existed! Tyrannosaurus rex and Triceratops were two supreme beasts that happen to also be the most formidable animals in North America at the end of the age of the dinosaurs. This exhibit highlights an apex predator with bone-crushing teeth versus a large plant-eater with armour and weaponry that would make a knight jealous”.

The exhibit opens up January 26th and runs through May 19th.

Discovery Center members can enjoy a special members-only preview to explore Battle of the Titans from 7:00-8:30 on Friday, January 25th.