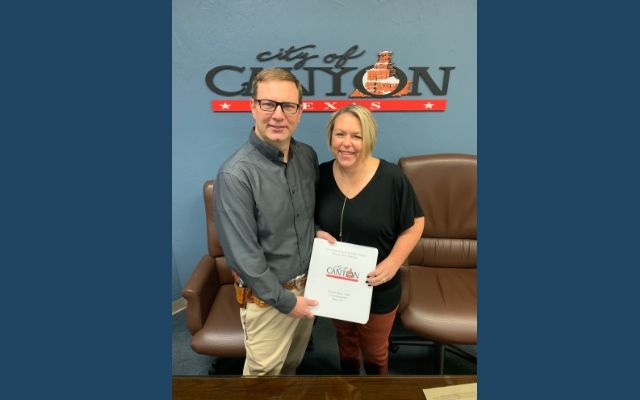 Jones is a Canyon resident who was a police officer for 15 years and has served as a commissioner for the last 2 years.

Randall County Sheriff Joel W. Richardson says, “Cody provides great leadership as well as a good perspective he gained while he was employed by the City of Canyon.  Cody brings a special point of view as to how important first responders are to the city. Cody is level headed and even-tempered and brings a calming effect.”

He is the President of the Canyon Chamber of Commerce along with serving on the United Way of Amarillo and Canyon Governing Board and serves on the Canyon Noon Lions Club Board and is very involved in the Snack Pak 4 Kids program.

Mandy Williams, owner of the Canyon Cake Company and Vice President of the Canyon Chamber of Commerce says “I would like to see Cody Jones run again for City Commission Place 2 because he is a hard working average citizen who understands the ins and outs of our city government.  I know Cody is committed to being conservative with our taxpayer dollars but also understands the need to spend money when needed to maintain our city.  Cody has integrity and is a solid listener when the citizens of Canyon speak.”

Jones also serves at the rank of Sergeant at the Randall County Sheriff’s Office overseeing the Sheriff’s community policing programs where he runs the Crime Prevention Programs and is the Emergency Management Liaison for the county.

He currently serving on the Texas Municipal League’s Legislative Policy Committee which studies and addressed bad legislative bills that could have a negative impact on local governments.